The AMBA & BGA Latin America Conference for Deans and Directors, will take place in the beautiful city of Cartagena, Colombia, from 21 – 23 September 2022.

This unmissable gathering of Business School leaders from across Latin America is designed to address pressing issues in business education.

Expert speakers from around the world, representing leading corporate organisations as well as your fellow Business Schools, will join us in this beautiful city to inspire collaboration, facilitate debate, and share personal and professional experiences from the world of business and management education.

Key themes and topics of discussion

This year’s programme is steadily taking shape and will be updated frequently over the coming weeks. The key themes you can expect include: 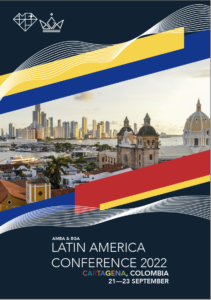 Learn more about our sponsor

Instructure is an education technology company that supports innovation in virtual and hybrid education for more than 30 million students and educators around the world, recognised globally for being the makers of Canvas, an open source cloud-based LMS (learning management system).

Canvas is a leader in the LMS market segment in universities in the US and other countries around the world, and is present in Latin America supporting universities and higher education institutions to drive educational innovation and student success in the region.

Instructure’s learning platform integrates with more than 500 technology partners, including AWS, Adobe, Google, Microsoft and Zoom, among others. It is recognised for the ease of adoption and use of its tools and, especially during the pandemic, for the performance of its mobile application, facilitating access to education for students in remote areas and without the need for high-end mobile phones.

Our speakers so far include:

Learn more about our speakers below:

The conference will take place at the stylish Hyatt Regency Cartagena.

Delegates can enjoy convenient conferencing facilities, comfortable guest accommodation, and an ideal base from which to explore the sights and sounds of our host city.

The hotel enjoys outstanding views of the Caribbean Sea and the Bay of Cartagena.

AMBA & BGA has negotiated preferential room rates for all our conference delegates at the Hyatt Regency Cartagena for the duration of the event. For more information and to book your stay, contact Anita Galea: anita@pacific7.co.uk.

In keeping with our unrivalled networking and dining options, we can unveil our handpicked venue for our Conference dinners.

Wednesday’s dinner will be hosted at the Restaurante Fuerte Del Pastellilo at the Club de Pesca.

Thursday’s dinner will be held at the luxurious Charleston Santa Teresa Hotel.

During the networking tour, we will visit Getsemani which is considered the bohemian part of the walled city, decorated with artistic murals and paintings.

We will then continue onto Manga; a province of Cartagena, which houses the Fort San Sebastián del Pastelillo and mansions with 20th century architecture.

Following this, we will take in wonderful views of the city from atop of the Mount la Popa, as well as the Nuestra Señora de la Candelaria de la Popa monastery. Heading down from Mount la Popa, we will then travel to the historic Castillo de San Felipe de Barajas, which dates back to 1536.

Lastly, we stroll along the inside of the walled city and take in the beautiful streets and plazas of the city, as well as the many 17th century churches and houses. These feature the wooded balconies and flower decorations, often associated with the beautiful city of Cartagena.

If you have any question or need assistance with booking, please contact our Head of Events: Carolyn Armsby, by clicking below.

Learn more about our upcoming events below.